Do people who claim to follow The Christ, whom they believe to have been a man named Jesus, honestly think that their Messiah could pick and choose which Romans to make furniture for and which not to? Do they honestly not remember?  Before Jesus began his ministry, he worked at a job in a kingdom not God’s kingdom, called Rome — a long gone kingdom, that the United States is largely based on.  For thirty some years, Jesus “served cake” to good Jews, bad Jews, good Samaritans, bad Samaritans, Roman government officials, and Jewish Pharisees, Roman heterosexuals and Roman homosexuals.  It was a business. And an art, because — Like His Heavenly Father’s work when He joyfully created the world, and His earthly mentor Joseph’s work, when he taught Jesus how to work wood; Jesus created things.

For 30 years, Jesus ran a creative business –run by the only perfect Son of God who ever lived. If I read the words and biographies of this Jew named Jesus, I think Jesus was well aware that our practice of God’s laws, our service to God’s authority, our worship of the True God, involves what I do – not what others do.  What others do is up to God, not me.

When did we think that the work of our hands was meant to be used to proclaim our beliefs as a bludgeon rather than as a way for all the world to see a creative, loving God who is quite clear that He gives the rain to fall on the “evil” and the “good”?  When did we lose sight of the fact that all of fall into both of these categories — evil and good?

No matter what I believe about any particular choice of another human being, I am meant to use the same measure for myself.  If I claim to use the Jewish and Christian Scriptures as my guide, then I must immerse myself in their meaning for my place, time, and soul.

Shall I stop serving cake to divorced people?  How about people who lie? The Scriptures are very harsh on greedy people, shall I stop serving those I deem more sinfully greedy than myself? How about people who harass other people?  Why do I draw this line and not others if I am claiming a religious belief?  One should have to be consistent.  One should have to put a sign on one’s door that says: “I will only serve people whom I believe are not living in sin”.

If I stopped serving cake to people whom I thought were sinners, then to be Biblically consistent, I would have to never allow any one to serve cake to me again, that is for sure! Jesus was the King of this Kingdom of God’s while on earth and if you claim Christianity, He is the King of our Kingdom now –now, present and reigning. If I let Him.  If I follow His lead.  Jesus might laughingly say to us today, “Let them eat cake”, not as that capitalistic Queen of old might have said to keep the poor people in their places in her moronic inability to understand that some people were starving on her watch.  Jesus said, “let me serve you ALL cake”  this is my “cake” broken for you, take this in remembrance of me. Because all are welcome at my banquet.”  We should do likewise, if we want to put His name on anything—like our souls. Or our business.

I mean really, people, there are Christians today who want a job so badly they are willing to sell themselves as slaves. These are the people we need to be serving cake to.  There are people being beheaded for their faith in parts of the world today; there are people in places like Russia who have to worship behind closed doors. Are you honestly going to spend “God’s” money on suing people over whom you serve cake to and you do not serve cake to!?  Oh, and there are people in this very country who do not have enough money to buy cake.  Interestingly enough, there are Christians in this country experiencing reverse discrimination and not being allowed to get licenses because of speaking privately about their religious beliefs.  But this whole cake business, muddies the water when we as Christians try to point out when religious freedoms are truly threatened.

This cake business has nothing to do with any of your freedoms. It has to do with the freedoms we all get to experience in a place much like Rome.  Jesus came in the “fullness of time” to an Empire that would let Him worship His God in the way He believed was right to do. Until they didn’t.  Then they killed Him. We get to live in a country that from the beginning has allowed people to worship their God in the way they believe is the right way to do it.  It will be  a day of reckoning if when we who claim to be Christians stand before the Supreme Court of Jesus, and He has to say sadly, “Depart, I never knew you.  When you did it to the least of these, you were doing it to Me.”

In America, we have come to believe that money is the answer to everything, rather than God being quite able to stand up for Himself and us, if we let Him.  Instead of worshiping money as the answer or even America as the answer, we would do better to get back to work and glorify God in all we do, think and say.  God will win His own battles if they are truly His. If not, a little humility on our parts in what we understand and do not understand and a lot of humility in terms of how we treat others in the way we want to be treated might go a lot further than The Supreme Court.  If we believe in Jesus, we believe in a much higher court than that. Maybe we should try spending our money on people who truly have no freedom to worship God.  Or on people who are truly hungry.  Or better yet, on people who are hungry for truth, justice and love.  One served cake at a time.  We would do better to worship God in spirit and in truth, not on this mountain or that. And  better to get back to work. The time draws near – -Our King has Come, is Present, and Will Come Again.  Be ready.  Time to get my own cake shop in order. 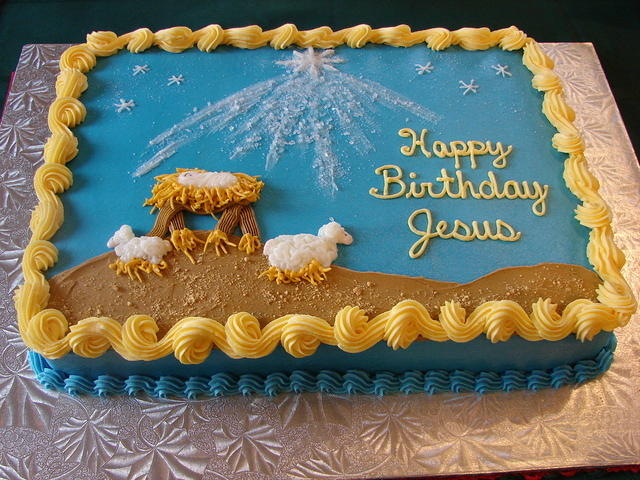 2 thoughts on “Let Them Eat Cake by Jane Tawel”