Resurrection is a Threat, Not a Promise 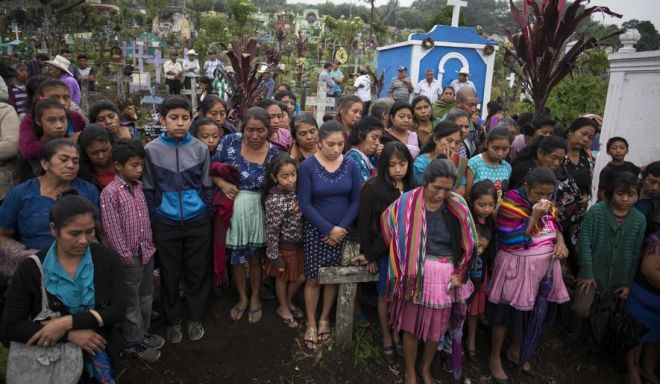 It seems a “good” time to share once more excerpts from this poem by Guatemalan Poet, Julia Esquivel.  This poem, written as witness to the horrors inflicted on the people of Guatemala in the 1970’s and 1980’s, is now perhaps even more tragically relevant to us in this place at this time. Who are we in light of this current onslaught of naked need?  I include as well, a short meditation on this poem by Parker Palmer from The Active Life.

If we are not being threatened with resurrection today, and especially if we are the sort of people who are still planning on celebrating the upcoming Good Friday and Easter / “Resurrection Sunday”, perhaps we still don’t really “get” this whole Christ thing? Perhaps we don’t even get this whole Human thing? To paraphrase Palmer, “If we are to take seriously those who complete their own “marathon of hope”, The Christ’s calling, perhaps we too must undergo some form of dying.” I fear and feel deeply and spiritually that if we do not, join the “least of these”, the lost, the poor, the sojourners and needy, in, as Esquivel writes, this “marathon of hope”, we will never reach “the finish line which lies beyond death”.

I hope you will read Ms. Esquivel’s searing poem and I hope, as I am, you will be threatened by it.   Resurrection is not a promise for believing in Christ’s life, my friends, it is a threat for those willing to die with Him. The King of The World lived not in the safety and cushy-capitalistic “Christianity” of my lifetime, but in the threatening and threatened world of self-imposed poverty and outcast status of the Judeo-Roman last century B.C. Jesus has threatened us with these words:  “For as you have done it unto the least of the world’s humans, you have done it as unto God.” Those words are either terrifying or hopeful, depending on whether we hear them as promise or threat. Perhaps we need to hear them today as both threat and promise.  As Esquivel says, “then we will know how marvelous it is to live threatened with Resurrection”.

“They Have Threatened Us with Resurrection”

It isn’t the noise in the streets

that keeps us from resting, my friend,

nor is it the shouts of the young people

coming out drunk from the “St. Pauli,”

nor is it the tumult of those who pass by excitedly

on their way to the mountains.

It is something within us that doesn’t let us sleep,

that doesn’t let us rest,

it is the silent, warm weeping

of Indian women without their husbands,

it is the sad gaze of the children

precious in our eyes

Now six have left us,

and nine in Rabinal,

and ten, a hundred, a thousand,

witness to our pain,

What keeps us from sleeping

is that they have threatened us with Resurrection!

though weary of killings,

an endless inventory since 1954,

yet we go on loving life

and do not accept their death!

Because we have felt their inert bodies,

and their souls penetrated ours

because in this marathon of Hope,

there are always others to relieve us

who carry the strength

to reach the finish line

which lies beyond death.

because they will not be able to take away from us

nor even their death

and least of all their life.

in the streets baptized with their blood,

in the air that absorbed their cry,

in the jungle that hid their shadows,

in the river that gathered up their laughter,

in the ocean that holds their secrets,

in the craters of the volcanoes,

Pyramids of the New Day,

which swallowed up their ashes.

because they are more alive than ever before,

because they transform our agonies

and fertilize our struggle,

because they pick us up when we fall,

before the crazed gorillas’ fear.

They have threatened us with Resurrection,

because they do not know life (poor things!).

That is the whirlwind

which does not let us sleep,

the reason why sleeping, we keep watch,

and awake, we dream.

No, it’s not the street noises,

nor the shouts from the drunks in the “St. Pauli,”

nor the noise from the fans at the ball park.

It is the internal cyclone of kaleidoscopic struggle

which will heal that wound of the quetzal

it is the earthquake soon to come

that will shake the world

and put everything in its place.

it is not the noise in the streets

which does not let us sleep.

Join us in this vigil

and you will know what it is to dream!

Then you will know how marvelous it is

to live threatened with Resurrection!

to live while dying,

and to know ourselves already

The longer that one dwells on the poem, the harder it is to say exactly who threatens us with resurrection. The poem itself is like the kaleidoscope whose image Esquivel uses; each time you turn it a new pattern appears. So the poem imitates life, in which the “threat of Resurrection” comes both from those who dispense death and from those who have died in the hope of new life… If it is true that both the killers and the killed threaten us with resurrection, then we, the living are caught between a rock and hard place.  On the one hand, we fear the killers, but not simply because they want to kill us.  We fear them because they test our convictions about resurrection, they test our willingness to be brought into a larger life than the one we now know. On the other hand, we fear the innocent victims of the killers, those who have died for love and justice and peace. Though they are our friends, we fear them because they call us to follow them in “this marathon of Hope.”  If we were to take their calling seriously, we ourselves would have to undergo some form of dying.  (Parker 147-8)