Fishing for Food for Thought 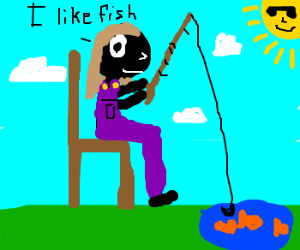 So, the problem is I have long had this idea that you are supposed to analyze things and figure stuff out and think critically about things.  I believe as many others do that this makes one smarter and wiser. The PROBLEM is, that some times when you apply this thoughtful principle to thinking about other people, you end up becoming not a critical thinker but a critical human. The definition of “critical” when used for valuable thinking is thinking that uses careful reflection for analysis.  The definition of “critical” when applied to another person is to judge severely and often too readily.  Jesus advises us not to judge people but to wisely use our judgement to think critically and grow in wisdom.   But when thinking about “stuff” becomes an inability to let go of negative thoughts about others, then we are not critically thinking, we are thinking critical thoughts. We are criticizing, not analyzing. Our “thoughtfulness” becomes “thoughtlessness”.   The mind ever so sneakily shifts from analyzing in order to understand to condemning to bolster pride.  Suddenly one might realize that she has actually stopped thinking and without realizing it she is instead feeling. Feeling is always “suspect” in terms of navigational reliability, whether you are madly in love or so angry you can’t see straight. We use metaphors to imply that the Heart always needs the Mind and the Will to moor its reckless meanderings. The Bible and all great poets from Shakespeare to Eminem write about the tricky Heart and how it masquerades as a thinking organ.  Our current rich First World View seems to honor the heart i.e. feelings i.e. myself over the mind, the will, the seat of reason.  And when the mind is stimulated to thought by a negative emotion—large or small — then the analytical, rational, “need-to-understand” part of a human begins to deteriorate. Much like Gollum in The Lord of the Rings, the obsession begins to take over the person, and “my Precious”, unseats the image of God in me. This is the judgement  that is sin not wisdom. Whenever we sin, our God-image created ability to do and will, and willfully be creative is replaced with an image that is sickly, obsessive, and less than human (or hobbit)-like. Our stature shrinks and we become fixated and obsessed with one thought – holding on to the precious “fishy”.

So lately, I’ve tried to apply a fishing metaphor to my problem because I’m weary of:

But!!! (she says in her defense) –I still feel like I have to figure out what is going on – even if only so I can stop doing all of the above.  I still feel that if I can just understand, comprehend, assess, analyze, think it through — then I can either avoid the feeling, avoid thinking about the situation, or avoid the person. Maybe.

I have come up with a new fishing hole so to speak.  I have determined I will allow the thought, I’ll look at it, do some figuring over it and then as soon as I have analyzed it, I will not think about it anymore. My new brilliant, copyrighted program is called…..

The Catch and Release Program

“Throw the Small Fish Back In”

I’m going to “Catch and Release” all my little criticizing negative thoughts.  I will still reel in the fishy – that’s unavoidable — but I won’t make it my “precious”.  I won’t bash the fishey’s head, scale it, (do you know how much wasted effort goes into scaling small fish?!)  and take it home with me; there’s just not enough flesh there.  AND –anything too small, too insignificant, too unnourishing to keep, to digest, to “ingest” to make me a more wholesome, nourished human being – any thing too petty, scrappy, silly, tiny, or obsessively consuming — I will THROW OUT.  I will release these small fry ideas back into the shallow waters where they belong. I will quickly reject the negative “guppies” and “minnows”.  I’ll make sure that what I keep –and keep thinking about –are important things—things meant for some growth, either on my part or for someone’s else benefit. And ultimately I will try my best to keep thoughts only fit for the Kingdom. The King of that Kingdom, Jesus, was a great one for guiding His disciples into where to cast our nets for fruitful fishing.

BUT …here’s the “Catch”. I am one of those disciples that it seems more often than not  keeps fishing out of the wrong side of the boat.  Here are the catches that keep me from being a “fisher of lives”.

Catch #1:  I’m a keeper. A hoarder, perhaps. Small thoughts store themselves in the corner of my head and I fear letting even one go or I might miss something. I still keep blurry photographs because it hurts me to throw them away. This is like hanging on to memories of bad stuff.

I need to release these remembered unourishing fishies to The Past.

Catch #2:  I’m not completely sure I am truly seeing the right “size” of the fish. My mind’s eye is not 20/20. Maybe I could skin it, bone it and cook it.  Maybe it’s not as small as I’m making out. I’m a worrier that I’ll miss something.

I need to release worry fishies to The Future and “let tomorrow take care of its own problems”.

Catch #3:  I keep catching the same darn fish.  The little boogers keep grabbing my mind’s line every time I throw it back in the big lake of thoughts.  Same darn little fish.

I need to release obsessive “take up too much of the net” fishies to The Present and to anticipate with hope great things happening – Big Kingdom Fish in my net. I must practice sitting still and praying patiently– in the very moment in which I live– waiting in peaceful stillness for the Big Ones to bite the Hook of Hope.

One question I’m left with – how small can I make BIG things? Or rather what seemingly, apparently BIG things could actually be “small fry”? If I put on Kingdom glasses, how would the World’s BIG things look? I mean really, don’t I pretty much blow many things out of all proportion in terms of fretting, getting angry or irritable, or just obsessively thinking about them?  That is– if I believe that the bible’s worldview is true?  If I believe that as Christ tells us, the fish are really all on the other side of the boat?

There are indeed big things that we are commanded to either mourn for or fight against or both. There is evil still and monsters in the sea. But in Christ’s Upside Down Kingdom, even those big things in this world are a bit like the monster fish in the fairy tales or “tall tale” stories, where the fish  gets bigger and bigger in the fisherman’s imagination and finally all the fish, even the minnows, are shark size.  Even large problems – newspaper problems, political problems,  pain problems – in the Kingdom Life of Christ the King– truthfully — aren’t they really smaller than they appear?  Just like the ads warn us: “Items in this picture may seem larger than they are in real life.”  Items in this World’s picture definitely appear larger to us  than they appear to God and to us if we live within God’s Real Kingdom Life. Life fishing with Jesus, Life with The Fisher of Men, Life walking on the water out of the boat towards Jesus, make even the sharks not quite so very large. And without doubt, make it imperative to get the guppies out of our nets so there is room for the souls of our fellow humans.

So I hope that maybe today I will not worry that I am not smart enough, analytical enough, worldly enough, right enough to figure out all the fish in the sea.  I will also not obsess about the “ones that got away”.  I will focus on the fish God puts in my net. There are plenty there for me and if they are wholesome, good, nourishing thoughts, then there is plenty there to share. All the rest that I catch, I will quickly release.

God provides an abundance of good fish for His children. And God “loves to give His children good things”. We just have to keep our eyes on Jesus and follow his commands to know where to cast our nets.

5 thoughts on “Fishing For Food for Thought”